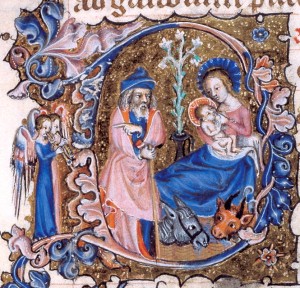 I planned to write a lovely, uplifting, carol-infested Christmas post. This is not it, though if you click the links you will find the carols.

Christmas carols and nativity scenes from medieval manuscripts are some of the most familiar, visible elements of medieval religion for most of us. We hear medieval carols sung in the soaring voices of choirboys and we perhaps don’t think much about their words. But when I started to trace through the lyrics of medieval carols, I found medieval writers were preoccupied, even troubled, as to how to represent the role of women in this central Christian narrative.

The Christmas story is, as generations of feminists have observed, not entirely the most feminist part of that deeply woman-friendly book, the Bible. A lot of medieval Christmas texts  ham up Christ’s immense concession to humanity in spending nine months in the womb (yeuch! Woman parts!) until the Son of God comes across like the sort of child you particularly don’t want to meet. Images like the one above show all the elements of the story: pissed-off looking Joseph (in pink, as usual), friendly animals apparently having a good chat, angels visiting the stable … and Mary, with eyes only for her baby. Of course, her role is central, but she’s basically there as a conduit, a vessel for Christ, just as her role as a saint is to be primary intercessor on behalf of humanity.

People often think that medieval women were radically different from us, guilt-tripped into believing the Bible literally and frightened into obeying their priests by a combination of ignorant superstition and guilt-inducing imagery. The idea persists that medieval women’s emotions were somehow less sharp or deep than our own; that they blundered through life without cherishing their children or questioning the religious doctrine they learned by rote. When we picture their religion, we don’t picture the nativity. We visualize the gaping mouth of Hell, stretched wide to take in the bodies of naked sinners frantically clasping at the hand of the bearded figure of Christ (at the far left), trying to pull them out. 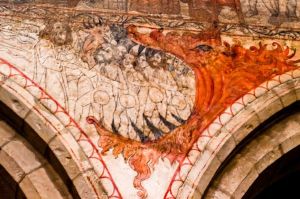 The Mouth of Hell. Wall Painting at Pickering Church, Yorkshire

This image is actually totally relevant to medieval views of Christmas. The narrative it depicts is the ‘Harrowing of Hell,’ when Christ stormed the gates of Hell and rescued the Old Testament dead from their torments. This is the story told in the carol we know as ‘O Come Emmanuel‘. It was written in Latin at some point between the eighth and twelfth centuries, and the ‘captive Israel’ of which it speaks is the Jewish people, freed by the coming of Christ.

Because medieval writers loved the idea of events that echoed each other, the Harrowing of Hell features in medieval carols as the triumphant conclusion of Christ’s own descent into the ‘Hell’ of his mother’s womb. Yes, it’s a delightful example of misogyny. This episode allowed medieval people to imagine Christ as a crusading knight,  no longer meek and mild but armed for war against Satan. This was crucial: naturally, the bleeding, suffering Christ of the crucifixion looked just that little bit too feminine at times (eg., if you squint really hard and have a well-exercised phobia of menstruation). A more macho, swords-a-swinging image of Christ was needed to reassure your average medieval knight that all was right in the world.

This led to a tradition of carols where the Annunciation, the story of Mary’s conception, was provided with a dashing lead male role (it can get worryingly woman-centric, that narrative, what with it being about a virgin conceiving without a man). ‘I sing of a maiden’ is a perfect example: supposedly about Mary, three of its five verses are about Christ’s role in his own conception. When I was first studying the lyrics of this carol, I was told to focus on the remarkable way the author of the carol attributes the choice to Mary, as the line ‘to her son she ches’ means ‘she chose him to be her son’. I was not invited to interpret Christ sneaking up on an unnoticing Mary as an exemplary vision of romance, admittedly, but nor did I immediately realize that ‘oh, you’ll barely notice I’m here, I’ll be so quiet’ is not actually the least creepy of chat-up lines.

Another medieval carol written in the great tradition of the backhanded compliment to women is ‘Adam lay y-bounden‘. This carol, if you’re not familiar, spans the whole of Biblical history in sixteen lines:

This carol is another ‘Harrowing of Hell’ story really, with Adam freed from his chains. But in this text, Christ is totally left out. The carol manages to tell the Christian story without a single mention of him, skipping straight from Adam’s transgression in the Garden of Eden to Mary’s coronation as Queen of Heaven. It is now Mary who is the knight, the heroine, rescuing Adam from his four thousand winters chained in Hell. Sounds nice, right? Empowerfulizing?

The carol is a neat example of a favourite medieval ‘I’m not a misogynist but …’ doctrine, the  felix culpa or fortunate sin, which explained Adam’s transgression as a necessary precursor to Christ’s becoming human. The same doctrine represented Eve’s wicked and implicitly sexual temptation of Adam as something that could only be forgiven by Mary’s impossible act of virginal motherhood. Yet Eve, like Christ, is omitted from this carol, so that its message is unsettlingly unfinished: is her transgression forgiven? Is she freed from her chains? Is Mary’s role in the salvation of mankind only something to celebrate because here she has taken on the Christ-like task of storming Hell, and risen above her feminine, lustful nature?

The roles Mary plays in medieval culture – either a perfectly feminine, completely inimitable virgin mother or a Christ-like, semi-masculine figure – seem designed to set women up to fail. What place is there for ordinary women in this picture? 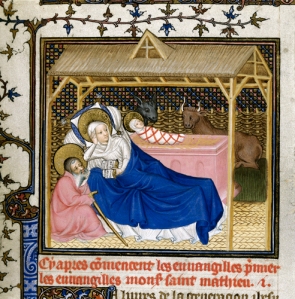 This image, from a manuscript made in Paris at the beginning of the fifteenth century, shows Mary looking distinctly underwhelmed, displaying a complete lack of the startled wonder or absorption in her newborn we might expect. Propping her head up on her elbow, she ignores Joseph, who peers anxiously at the prayer book she has let fall. She even stares past her swaddled baby, to something outside the frame of the image, which we cannot see. Mary’s gaze directs us to look beyond the familiar nativity scene, to imagine what happens at the margins of the narrative, to the women who, like Eve, are quietly erased to preserve the focus on Mary alone.

Following this gaze to the margins of the narrative, we do find medieval carols that offer us an insight into the ways medieval writers imagined the voices and emotions of ordinary women. Written as lullabyes, they give voice not only to Mary’s experience, but also to the shared experience of all mothers. They are poignant, as modern settings tend to remind us, and I’ve usually heard this explained by modern vicars in terms of our awareness of Christ’s eventual fate: we know that the mother bending over her baby will be the woman wailing by the Cross. But for medieval women these carols must have had another dimension. In this period, any ordinary baby’s life was fragile, and quickly lost. The haunting ‘Coventry Carol‘ tells the story of the generation of ‘ordinary’ baby boys almost forgotten in the Bible narrative, the victims of Herod’s decree, and its lullabye refrain reaches out to remind listeners of the baby that is no longer there to be sung to sleep.

This rare memorial of human, rather than divine loss places the emotion of ordinary women at the centre of the narrative, for the brief space of a carol. It’s unsettling to listen to this plangent song amongst Victorian pomp and celebration. Medieval writers and artists struggled hugely with the idea of a woman who was sinless and perfect, with the idea of Christ, the salvation of the world, confined to the dreaded space of a woman’s womb. Yet, even as women other than Mary are excluded from the Christmas narrative, alienated by her seemingly inimitable example, we find voices memorializing women’s experiences, linking us in a chain through history. The carol reminds us to remember the humanity of medieval women – of all women separated from us by time and space – and to remember them even while we celebrate.

7 thoughts on “Memorializing Loss: A Christmas Carol for Medieval Women”