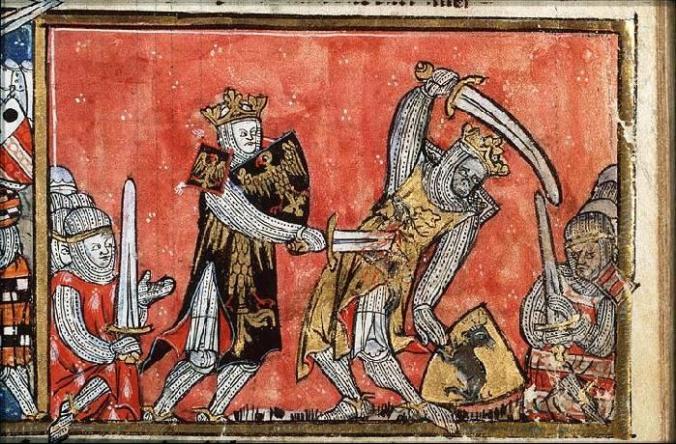 This is an unashamedly geeky post, which I writing because it’s hot, and I’ve been doing a lot of proofreading, and because I enjoyed writing about Game of Thrones, misogyny and medieval romance last time. I’ve had a question from Rachel Moss (tweeting over on @WetheHumanities today) going round and round in my head today. She was talking about the popularity of the medieval era for fiction writers, and asked ‘What is it about the Middle Ages than encourages people to use it for fantasy?’

As I was thinking about this question, I came across this piece, titled ‘Why “Game of Thrones” Isn’t Medieval, and Why That Matters’. Now, normally, that title would make my heart sing, because I am fed up with the lazy justifications of G. R. R. M.’s misogyny as ‘just the way it was back in the Dark Ages’. There were some nice points in the article about how Martin picks different technologies from different eras. And I liked the point that, aesthetically, Game of Thrones is closer to Victorian romanticism of the medieval, than to the medieval itself. But, unfortunately, so is this article.

The author, Breen, puts forward the argument, basically, that Martin’s world isn’t medieval because it’s too technologically and scientifically advanced. The majority of Martin’s world, he argues “belong[s] to what historians call the ‘early modern’ period”.

I admit, in my fantasy world, there will be some kind of cosmic retribution system for anyone who uses the phrase ‘what historians call the [insert name] period’. I’ve never seen two historians agree unreservedly on the limits of pretty much any historical period, and when they do, you can be damn sure they won’t be talking about the medieval/early Modern division. But here’s what the author describes as being definitively post-medieval in Martin’s world:

“Seven large kingdoms, each with multiple cities and towns, share a populous continent. Urban traders ply the Narrow Sea in galleys, carrying cargoes of wine, grains, and other commodities to the merchants of the Free Cities in the east. Slavers raid the southern continent and force slaves to work as miners, farmers, or household servants. There is a powerful bank based in the Venice-like independent republic of Braavos. A guild in Qarth dominates the international spice trade. Black-gowned, Jesuit-like “Maesters” create medicines, study the secrets of the human body, and use “far-eyes” (telescopes) to observe the stars. In King’s Landing, lords peruse sizable libraries and alchemists experiment with chemical reactions and napalm-like fires. New religions from across the sea threaten old beliefs; meanwhile, many in the ruling elite are closet atheists. And politically, in the aftermath of the Mad King and Joffrey, the downsides of hereditary monarchy are growing more obvious with every passing day.”

So: what makes a world post-medieval is good trade networks, navigation, urbanisation, scientific inquiry, religious diversity, and growing disinclination for hereditary monarchy (no one told Henry VIII about that last one, did they?). To me, a lot of this sounded rather like the Roman Empire, but I’m no Classicist (and I couldn’t think of a parallel to the Iron Bank). I couldn’t really see how any of it was distinctively post-medieval, as opposed to fifteenth-century English, and I’m inclined to think the Braavosi are Lombard bankers, or maybe the Florentines who’d financed Edward III’s wars back in the fourteenth century.

However, Breen goes on, rather disingenuously I thought, to discount the fifteenth century that Martin claims to be drawing upon, and to look at the High Middle Ages:

“A world that actually reflected daily life in the High Middle Ages (12th-century Europe) would be one without large cities or global networks. A diversity of religions would be inconceivable. Many aristocrats wouldn’t be able to read, let alone maintain large libraries. And no one would even know about the continents across the ocean.”

What Daenerys has in store for the wildlings. London, BL, Royal MS 12 C XIX, f. 62r. Note: I’m showing you elephants for a reason …

Because I’m nice, I’ll accept that what the author means by ‘large cities’ and ‘large libraries’ isn’t defined, so he may have a point. That said, wiki (yes, I’m citing wiki. You’ll live) reckons the population of Paris in 1200 was about 110,000. In 1530 (‘early Modern’ according to the author), the population of London was about 50,000. The point about many aristocrats being unable to read is one that makes me want to curl up and whimper in a darkened room, and I accept that’s one of the inevitable side effects of writing 90,000 words on medieval reading and calling it work. But it’s the claims about religion and geographic knowledge that get me the most.

For starters, let’s look at what medieval Europe knew about continents across the sea and ‘global networks’. Twelfth-century England knew that Africa existed – there’s a brilliant series of books called The Image of the Black in Western Art, which demonstrate that true-to-life images of black Africans made their way into Western Art at a pretty early stage. They knew of the more distant reaches of the Islamic world, to a surprisingly detailed degree. I came across this lovely article about Arabic influences on medieval England, which claims the earliest Arabic-English loan word to be the Old English word ‘ealfara’. In the Anglo-Norman romance Boeve de Hamtoun, written sometime around the last decade of the twelfth century, hero explains:

“I was in Nubia, and Carthage, and the land of the Slavs, and at the Dry Tree, and in Barbary [North Africa], and Macedonia ….” 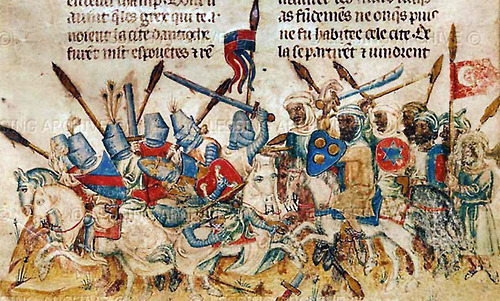 As this quotation might remind you, England was a nation familiar with the Crusades, which necessitated contact with Islamic religion and culture, but that’s not the only way in which the idea that twelfth-century England was a religious monoculture is inaccurate. At the beginning of the twelfth century, in England, there were basically two religions you’d expect most people to belong to: Christian (majority) or Jewish (minority). It also seems likely, looking at the prohibitions against witchcraft and superstition you find, that there were also people whose beliefs and practises were, at the very least, not exactly theologically orthodox Christianity. I don’t really study the twelfth century, but when I do, I’m always struck by the extent to which scholars were working with concepts not only from Christianity, but also from Judaism and Islam. In fact, this period is sometimes called the ‘twelfth century Renaissance’ because the rapid changes to intellectual life and culture marked a kind of ‘rebirth’ of learning. This book is just slightly later, but check it out – it’s Euclid’s mathematical textbook, written originally in Greek, translated into Arabic, and, in this thirteenth-century version, into Latin. How’s that for networking?!

As you might expect – and appropriately in the context of Game of Thrones – there are some rather horrible downsides to this era. For starters, anti-semitism seems to have been predictably present, leading up to the official explusion of the Jewish people from England at the end of the thirteenth century, and including the notorious massacre of York’s Jewish population in 1190. Slavery – both of serfs who were born into a system of extremely limited rights, and of foreign captives or trafficked men and women – isn’t a uniquely early Modern phenomenon either. The Vikings, when they weren’t busy journeying to Constantinople and being part of the Varangian Guard, were enthusiastic slave traders. In short, twelfth-century England (and Europe) had both the good and the bad bits of what the author of this article believes to be uniquely post-medieval about George R. R. Martin’s pseudo-medieval fantasy.

And I think it’s this – the genuine nuance of medieval England, the complicated, mixed-up world where people were both barbarically anti-semitic and intellectually fascinated by Arabic and Hebrew learning, where merchants traded with Africa yet also looked at maps that placed black men alongside monsters on the edges of the world – that the author of this article can’t get to grips with.

Concluding the article, he observes:

“as Martin’s books progress, we find that his is a world where women and people of color struggle to gain leadership roles, where religious diversity (if not toleration) proliferates, where characters debate the ethics of abetting slave labor, and where banks play shady roles in global politics.

Breen’s argument singles these aspects of Martin’s narrative as historical anomalies, things unheard of prior to the early Modern world. He relies for contrast on a fantasy version of medieval Europe, a fantasy of the primitive world that lies beyond the world we know, just as monsters and dragons lie at the edges of medieval mappaemundi, beyond the borders of the known world. 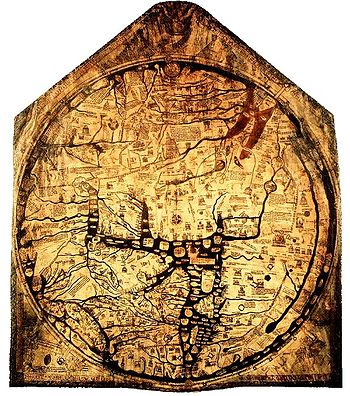 Yet, these maps were made not as cartography, but as religious idealism: they do not represent the world as medieval people knew it, but the world as the medieval Church wanted to imagine it. This fantasy glosses over the complexity of the Middle Ages under the guise of interest in ‘strong women’ or ‘women and people of colour as leaders’.

I get that this is a nice trendy argument. We love historical fantasy because it offers up to us an unflinchingly grim perspective on our own struggles. It might be unfair to speculate that it’s particularly common for right-on leftie white men to appreciate such unflinching, grim perspective, perhaps because it’s less of a novelty to the rest of us? The problem is, I suspect you can make the same observations about pretty much any period of history. Can you imagine a time when women and people of colour decided, en masse and without exception, ‘ah, heck, let’s just accept our destinies and keep our heads down’? No, me either. Though I can think of plenty of periods in which rather more scholarship has been devoted to noble white men who worked to free slaves and emancipate women, than to the slaves, ex-slaves and women who worked alongside them.