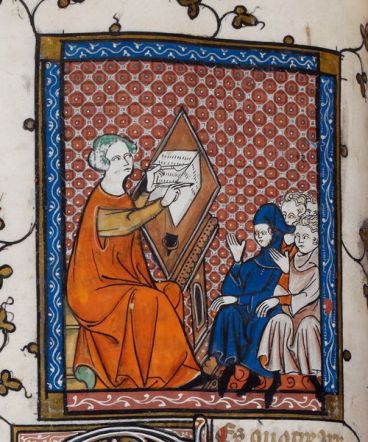 And no, this post isn’t technically about feminism or medieval romance, so you’ll have to forgive me for a moment, because I’m going to bang on about bad grammar and dyslexia. I’m writing this because for about the ninth time this month, I’ve heard someone insist that it’s perfectly fair to judge people who make grammatical slips, because there’s no reason to do that except for ignorance or laziness.

Now, personally, I’m not wild about judging people for ignorance. It seems like educational privilege to me. But I’m even more fed up with people who assume grammar errors can only be made through ignorance of correct standard English. In my experience, the same people tend to have a wildly idealistic attitude towards the history of the English language, so it’s always fun when you notice something in a medieval text that is a dead ringer for one of the ‘modern’ mistakes that horrify the pearl-clutchers.

And I found a nice one of those today.

When I’m reading medieval texts, I sometimes record them as audio files, and doing that really makes you pay attention to each author’s habits of expression, in a way that I don’t remember to do so much if I’m just reading silently. At the moment, I’m recording Julian of Norwich’s Shewings, a text written in the late fourteenth century by a woman who’s often seen as one of the leading religious thinkers of her time, one of the few women whose writing survives.

I’ve been noticing how much easier Julian’s prose is to read than the previous text I recorded (Piers Plowman, which is written in verse, specifically, what’s called an alliterative long line). Langland, the author of Piers, is a book fetishist. The poem is crammed with references to this or that book, this legal document or that charter, these words in the margins or that bit of rubric. Someone or other is always opening up scrolls or reading out papers, and there’s even a character called ‘Book’. Essentially, this poem was written by someone who, in 2014, would be going around the British Library licking the display cases.

Not so Julian. Her style is theologically complex, but you don’t get the impression she writes (or dictates) her prose with an image of a finished written page in her mind’s eye. This isn’t because she writes grammatically simple English, but because she (or whoever wrote the text down for her) has a really good ear for which sounds are easy to pronounce next to one another.

Here’s the piece where she describes her horror, and pity, at her vision of Christ’s crucifixion. Be warned, it’s deliberately gruesome:

“And … I saw that the swete skyn and the tender flesh, with the heere and the blode, was al rasyd and losyd abov from the bone … And that was grete sorow and drede to me. For methowte I wold not for my life a sen it fallen.”

(“And … I saw that the sweet skin and the tender flesh, with the hair and the blood, was all raised, and loose out over the bone … And that was a great sorrow and terror to me. For I thought I would not for my life of seen it fall.”

It’s not actually that hard to understand in modern English, if you read it out loud (and if you know a couple of tricky words). But what you may notice is that Julian doesn’t use the standard modern English grammar ‘I would not for my life have seen it fall’. She uses ‘a’, which is a homophone for an elided ‘have’. Here, it creates a slow sighing sound at the end of the sentence, perfectly appropriate to the image she pictures.

Elsewhere, she’s perfectly capable of writing ‘I would have’ and ‘I could have,’ so we can’t put this down either to pure incomprehensible medieval dialect: what we have is a situation where this was simply quite acceptable. It’s not because she, or her scribe, doesn’t understand grammar, or confuses an indefinite article with an auxiliary verb. It’s simply because they sound similar enough that, when the rhythm of the sentence demands it, she can blur ‘have’ into ‘a’ with no harm done.

Now, obviously, in formal, standard English, writing “I should of done that” or “I shoulda done that” is incorrect, and we know that.

To get technical, the reason people make this mistake (other than genuine ignorance, which is pretty simple to correct) is that “should’ve” and “should of” are homophones in some accents. You might think this would be a one-time mistake: you heard something incorrectly (aged six or so), and wrote it down phonetically once, before being corrected. But it’s not so, because of the way our brains process language as we write. As we write, we are aware of the sequence of familiar physical movements made to form letters (what we often call ‘muscle memory’). We’re also aware of the visual shapes made by familiar groups of letters on the page. And we’re aware of the sounds those letters should make. All of these three things are, for fluent readers, more or less on auto-pilot while we think about what we intend to type – or write – next.

If your auto-pilot is a bit faulty, you can find your fingers provided you with a word that’s not quite what you intended (as a medievalist who writes a lot about religion I can’t type the name Chris without adding a final ‘t,’ which is very flattering to any Christophers I know). And you can find you end up typing one homophone when you intended to pick up the other one, which was sitting neatly alongside it in the box your brain marks as ‘phonetically identical’. It’s thought that dyslexia results from some kind of fault in the way the brain processes aural and visual information, and so this is a characteristic dyslexic error – an auto-pilot error, rather than an error of grammatical knowledge.

So, why did I burden you all with this incredibly dull post on grammar? Well, it’s because I wanted to try to refute two really common misconceptions. One is that this sort of error is something it’s ok to judge people for making – or at least, it’s an error that ‘proves’ their ignorance, rather than their disability. The other is that this sort of error is one of the host of peculiarly modern mistakes, to be blamed on the (fictitious) decline of the English language in recent years.

When I started writing this blog, I decided that instead of spending hours painstakingly proof-reading each post, I’d give them a quick once-over and refer anyone who was bothered by the inevitably typos and errors to my disclaimer, which points out that I’m dyslexic and don’t proof-read well. This turned out to be a really good decision, because around a week after I wrote that disclaimer, I had my PhD viva and came away with a list of corrections only slightly shorter than the thesis itself.

Those corrections were appropriate: when I’m writing formal standard English, it needs to be spot on. But when I’m writing this blog, occasionally I’ll slip up. And that’s ok. And maybe, next time you see someone making an error like this, instead of judging, you’ll take a minute to consider they might be dyslexic, and to remember that, six hundred years ago, a medieval woman was writing shoulda woulda coulda all over the shop.

75 thoughts on “I Should Of Known: Julian of Norwich and the Venerable History of Dodgy Auxiliary Verbs”