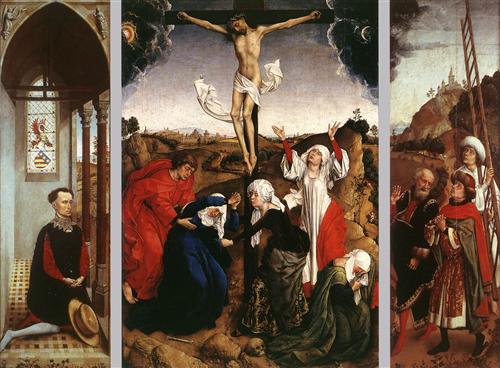 I thought I’d start with this image – a triptych probably painted by Rogier van der Weyden in the mid-fifteenth century – because I find it both compelling, and, frankly, creepy. The central panel is full of van der Weyden’s signature images of heightened emotion: bodies arching and sagging with loss, faces contorted. But at the right-hand side, a little further from the dying Christ, stand onlookers whose stance appears more matter-of-fact: gesturing to one another, they might be engaged in devout contemplation (as the clasped hands indicate), but they also look as if they’re in the middle of considering the practicalities of getting Christ’s body down with that ladder. Even more disorientingly, in the left-hand panel kneels the patron, gazing impassively at the scene before him, as if looking through a window in a sunlit colonnade. With neatly tucked-in legs and politely clasped fingers in his lap, he displays a disturbing lack of emotional response … which is surprisingly effective in prompting a stronger response from us viewers.

I’ve been thinking about the way emotion is displayed or hidden in medieval literature a lot recently, and so this image made me think of how we’re invited to relate to medieval portrayals of emotion, how they manipulate us to feel and think. The central focus of the triptych is not really Christ – who looks almost peaceful in death – but his mother, whose emotional outburst provokes a swirl of motion around her. In contrast, the male viewer – the figure who acts as a bridge between us, onlookers from outside the painting, and the main scene – reveals nothing of his inner response.

This quality of hidden or restrained emotion runs through a lot of medieval lyrics on the same topic. This morning, I balked at the queue winding out around the quad at King’s College (sorry!), and, so I hear, missed a lovely service. But, instead, I saw Dr Kate Ash sharing one of the Middle English Passion lyrics, and it worked its way into the lecture I’m currently writing. So, I thought I would include it here, too.

This lyric always reminds me of John Donne’s ‘Good Friday, 1613, Riding Westward’ in its sense of the motion of the heavens and the emotions of the human heart. I first came across the Donne poem in Sinéad Garrigan-Mattar’s classes ten years ago, and I love it. The medieval lyric, however, is much shorter, and the plangent tension between the beautiful image of the setting sun and the shocking disruption of Christ’s death only gestures towards the internal conflict Donne explores more fully.

The lyric is perfectly balanced, almost tranquil, in its repetitive economy of words. Yet, beneath the surface, its language is pulled in opposite directions by a series of puns. I can’t capture the precise depth of connotations ‘reweth’ carries in Middle English: it denotes not just pity, but also regret and pain, almost an admission of human guilt, which lingers underneath a series of puns set up through the lyric. The ‘tre’ is the tree of the Cross on which Christ sinks into death, as well as the woodland behind which the sun sets. The ‘sonne’ that sinks beneath the horizon is both a natural phenomenon, a beautiful image, and a ‘son’ whose death causes the world to shake and which (so medieval legend had it) temporarily blotted out the sun. Even the word ‘rode’, which refers to Mary’s tearful face, can also mean ‘cross’.

The tensions of this lyric are focussed, not on Christ – who is all-but-absent from the poem, glancingly evoked in the sun/son play on words – but on his mother, Mary. And it’s her ‘faire rode’ that is the most disturbing image of the poem: are we to imagine her face as ‘beautiful’ in its sorrow? Is the cross itself – an instrument of torture – in any way beautiful? Incorporating these problems, the lyric draws attention to the startling disjunction between its own beautifully crafted form, and the appalling sorrow of its subject-matter.

Like the triptych, the lyric shocks us into feeling the emotion it displays, by making us consider the aestheticization of grief and pain. Yet, at the same time, both forms concentrate the sense of excess – the overwhelming grief of Mary in the triptych, the excessive layering of double meanings in the lyric – in the body and face of a female figure, subtly undermining that gendered performance of emotion.

4 thoughts on “Too Much Passion: Women, the Crucifixion, and Displays of Emotion”