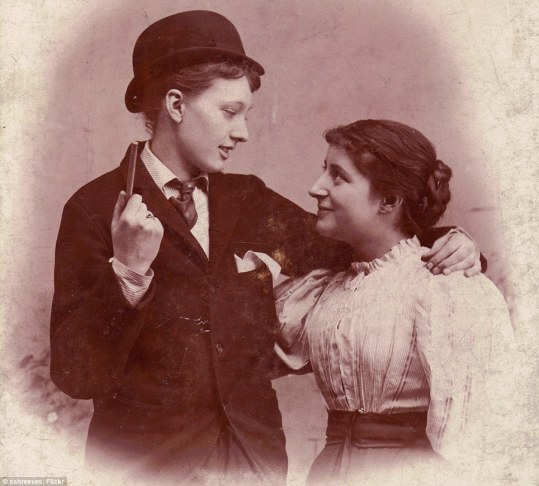 I really should be writing a lecture on medieval lyric at the moment, finishing off a book review and marking essays. But I procrastinate, and the world keeps turning, so I’m going to write this post instead.

The Guardian has a puff piece for a new play by Glenn Chandler, based on the lives of two Victorians who, so Chandler argues, ought to be known as early activists in the struggle for gay rights. The article’s language makes it very easy to picture these two – living in London decades before the landmark trial of Oscar Wilde – as if they’d been transplanted from a rainbow-coloured twenty-first century, because the key word throughout is ‘fun’. Wilde becomes ‘poor old Oscar’, guilty of little more than ‘play[ing] the wrong cards’, while his slightly lesser-known peers were just having ‘[so] much fun’. Now, I understand the impulse. Trying to recognise ourselves in the past is something we all do, and it’s incredibly tempting to smooth away the negatives and imagine that, from the bare outlines of historical fact, we can build a wonderfully familiar, positive, happy image. In the same way, I’ve written before about how brilliantly compelling the images of Victorian women cross-dressing are, and I’ve tried to explain, too, why I get slightly worried about people who assume we can interpret images from the past using our own modern categories of gender and sexuality.

So I started reading the article wondering how – or if – it would negotiate this. I read that the two men in the play, Frederick Park and Thomas Boulton, regularly dressed as women and used female alter egos, and – whether prudently or just because they fancied it anyway – took to the theatre, which has a time-honoured tradition of male cross-dressing. In 1870, police rounded them up, along with another male friend, and arrested them. They were tried for indecency, but got off because the jury found no evidence of anyone committing sodomy and (rather interestingly to me, as a medievalist who knows medieval laws) no evidence that men cross-dressing was any sort of crime in English law. As a result, the court treated the cross-dressing as a bit of a joke, rather than a serious threat to social decency. The article concludes with a quotation from Chandler, claiming that Park and Boulton:

“really thought their case would change things, they thought a change in the law was coming, but then in two decades we have the Oscar Wilde trial and it takes another two centuries for change to come.”

I admit, I’m not mad keen on the implication that the sort of ‘change’ these two hoped for can be neatly linked up to the changes of, er, 2070 (or even 1967), as if they were displaced members of Stonewall deposited in Victorian London via metaphorical Tardis. We don’t really know what these men hoped or expected, how they would have defined their own attitudes to their clothes or their actions. I’m even less keen on the way that this ignores pre-Victorian history. There’s a certain fashion for acting as if sexuality really began with the Victorians, whom I’ve seen credited variously with inventing the vibrator, lesbians, transvestites, manual orgasm and the empowerfulising (fictional) side of prostitution.  Talking about deviant sex in pre-Victorian England is held to be slightly embarrassing amongst all this fun Victorian stuff: it’s the historical equivalent of teenagers on the bus holding forth loudly about how, like, totally sex positive they are, while forty-something women roll their eyes at each other and someone’s mum mutters you didn’t invent it, you know.

For what it’s worth, people had been crossdressing, and getting arrested for it, for many, many, many centuries before Park and Boulton. For example, in the late fourteenth century, a man called John Rykener was arrested for posing as a woman – Eleanor – and prostituting himself to various men. He attended court in his woman’s clothing, and he admitted he had been married to a man, though he also slept with woman (without eliciting payment) while dressed as a man. Rykener’s story is startlingly similar to that of Park and Boulton, despite a gap of nearly five hundred years. It’s a warning that the neat fiction of those Victorian crossdressers as early gay activists should be taken with a big pinch of salt: an awful lot of history is not a connected narrative of progress and liberation.

But it also tells us something else about attitudes towards gender and sexuality further back in history. As Carolyn Dinshaw points out, Rykener’s evidence at his trial shows that he didn’t simply dress as a woman: he interpreted his behaviour as feminine and passive when he was dressed as a woman, and masculine and active when he was dressed as a man. For the former, he charged substantial sums of money – more, apparently, than women prostitutes could hope to command – whereas the latter he seems to have done for free. To modern readers, this may seem confusing: what did it mean to have sex ‘as a woman’? How did Rykener’s display of gender intersect with his expectation of getting paid? I read Rykner’s trial and wonder about the women he slept with – and the women who were paid less than him – and the women who understood from him that to have sex as a woman was to be passive. That’s not because I’m not interested in Rykener himself. It’s because you can’t take a figure out of history and relate to him alone, without considering the context. If you do that, then you dehumanise everyone else in that historical narrative, relegating them to the background.

And this is what I think is happening here. Fiction isn’t history, and a play can have an emotional power without needing to be weighed down with factual detail. But I find emotional power disturbing when it involves, not a selective reading of the past, but an appropriation and distortion of it.

The Guardian piece quotes quite a long comment from Chandler, which may be edited but reads as if it’s all one thought process, and which I found, frankly, pretty appalling. Explaining how writing the scripts for Taggart got him interested in court records, we’re told cheerfully:

“My favourite is a guy in Ohio who held his wife’s head first in a bucket of rattlesnakes and when that didn’t kill her he lifted her out and put her in a bath and threw in an electric cable and still failed. All around the world there were stories that I injected into Glasgow, not so much the gory ones, more the intriguing ones that tell you a lot about human nature.

Ultimately that’s the same interest that drew me to these two in 1870s London. In a tense atmosphere of homophobia they are young men having fun.”

I’m honestly not sure what to make of that. Yes, Chandler covers himself with a non-committal observation that this anecdote ‘tell[s] you a lot about human nature’, and yes, possibly, if you are a violent misogynist with limited capacity to see women as human beings, you might conclude it’s ‘human nature’ that’s being described here. If you are a violent misogynist, or just amazingly crass, you might juxtapose that anecdote with a reference to ‘young men having fun’. But … why? And how could you forget, even for as long as it took to put together this comment, that the lovely positive language of ‘favourites’ and ‘fun’ is describing several attempts to kill someone?

The violence here, the truly horrible event, clearly doesn’t make a mark on Chandler as he concentrates on what I imagine he fancies as the wider philosophical point, the point about ‘human nature’. And it was that selective viewing of someone else’s life – the packaging of that life into the quick prelude to a heart-warming story of ‘young men having fun’ – that really bothered me. The women in this narrative don’t fit the narrative or progress and liberation – and Chandler (or whoever edited his words in this article) doesn’t even seem to realize that there are parallel narratives of oppression here, intersecting ones even, only one of which is being told. What did Parks and Boulton really feel about their trial? Why were they dressing as women – would they have chosen it, in a different world? Would they even have identified as gay? What about other men (and women) who didn’t skip out of court laughing, supported by their families – and who still don’t? How does it help them to pretend to a continuity of gay rights activism, for which we don’t have the evidence?

11 thoughts on “Casualties of the Popular History of Sexuality”