When they first put me in this tower, sometime early in the twelfth century,
I was what everyone expected of a Saracen princess. Yielding, obedient, characterless …Soft as a mollusc, in fact.

The sea that lapped around my tower was full of red weeds, wine-dark;
And I should have been dark too. The poets extolled the whiteness of my skin
In language so flowery
It was clear they needed room to equivocate.

When Charlemagne’s knights came, clashing their lances under my father’s ramparts,
I ignored them. There was a garden on the tower roof.
With time on my hands, I became a healer, gathering flowers in the early morning
Before the sun burnt off the dew from the petals. Drops
Ran down my arms and chilled my skin.

As the centuries wore on, more stories accreted around me,
(like nacre around grit, or rings on a snail shell)
That I kept poisons, circled my waist with magic, kept Christian relics in my Muslim bed.
I hardened myself to them.

When the Christians came, offering rescue, conversion, the most romantic of marriages,
I barred the door. For my tower
Had become a fortress. 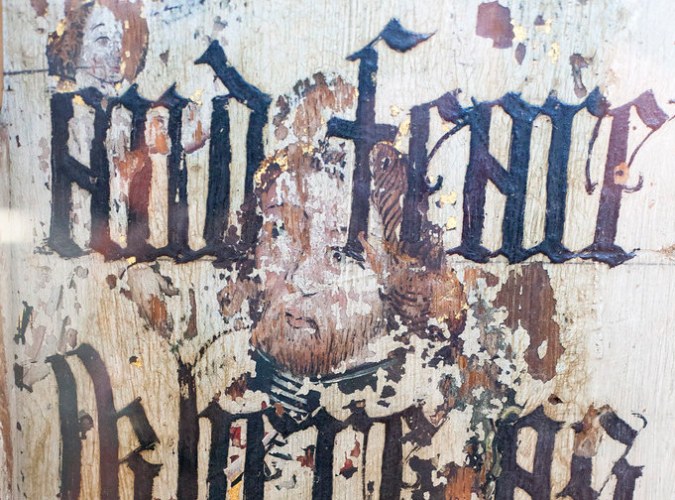 In the sixteenth century, reforms first under Henry VIII, then under Edward and Elizabeth, resulted in the removal of Catholic images and objects of veneration from churches. A more thorough programme of iconoclasm was carried out under Cromwell; one of its most energetic proponents was William Dowsing, who visited hundreds of churches across Cambridgeshire and Suffolk, recording what he ordered to have removed, defaced or destroyed. Amongst his favourite targets are the so-called ‘angels of the roof’ popular in East Anglian churches.

In the church at Binham Priory, under a new layer of whitewash with fresh-painted Bible verses in gothic blackletter, the saints lay buried lay with their eyes still open and their mouths solid with plaster-dust. Katherine and Apollonia, Michael, Zita and Roche waited patiently under their pall of lime until such time as the world outside should remember the established faith. At times the wait seemed very long and the black letters very heavy. Strange voices from the pulpit roared and boomed in increasingly strange varieties of English; there were no sounds of sacring bells or chanting processions, so it was hard to measure the passing of time. But the saints waited, and eventually the whitewash faded (though the blackletter remained, like prison grills over windows), until the saints could peer through its thin remains.

Their painted eyes frozen in horror, at first the saints saw only whiteness. The world was gone. Blank walls faced them. Sharp light slanted against bare stone. There were no candles burning. No smell of incense. No God.

Meanwhile, in St Nicholas at Lynn, the angels waited grimly for their turn. Staring furiously down from their ranked roof beams, they held their wooden wings outspread, like divers preparing to fall. They had watched, disbelieving, as men carried out rood screens and painted over images; as soldiers smashed windows with their pikes and slashed the statue of the Mother of God. They had seen how the cold grey light of the new windows fell harshly on the white-painted rood screen with its blackletter English prayer, beginning to wear through the flaking layers of the whitewash. Now they saw more men, with saws and chisels and ladders. Mouths open, the roof angels breathed a silent liturgy of St James, their voices roaring above the reach of human hearing, an endless song of mortal flesh, trembling in fear. As they watched the men tramp in and out, they heard each other’s wordless thoughts as those thoughts rose to a chant of vengeance. Messias. Sother. Emanuel. Sabaoth. Adonay. There was the faintest shifting sound, as if of old, brittle, light wood were splintering from the pins that might hold it in place.

Down in the nave, the men huddling around their ladder paused for a moment, as if hearing something. A dislodged spider dropped, suddenly, on its thread and hung, scrambling, in mid-air. The men shook themselves, remounted the ladders.

They say that the library of Alexandria burned to the ground. All the lost books of the Western world have been imagined to be in that lost library.

But what if there were another story?

While the library burned, what happened?

In the harbour, boats dipped and rode low in lurid water as men scurried back and forth with armfuls of books and scrolls pulled from the fire. Smoke rose up to block out the stars; light from the flames glowed copper across the sky. They boarded boats. Writings were clutched under arms, sheltered under cloaks against the spray, tucked into pouches and rolled tight. Frightened men heard the sounds of the riot receding behind them and tried to forget the screams of a woman dragged through the streets with her hair on fire.

An elderly librarian described the route, tracing a crude map with charcoal on the back of some papyrus. Then dark sea lapped around the boats and the smoke gave way to clear night sky. The men who carried the books nodded and dozed with their heads slumped on their chests. It was close to morning by the time their sails dropped and the oarsmen dipped their blades into shallow waters. They moored at the crude makeshift harbour and slept in the boats, rocking on the pale pink waters of the morning tide.

The island was remote. Ships rarely passed, and then only at a distance. It had been chosen by the librarians many decades ago as a place of refuge in times of need. Once, there had been custodians here, too: once, it was rumored, it had been intended for a second library. No one knew why those plans had been abandoned, but now – with the smell of the acrid cinders still in their noses and the sounds of screams in their ears – the librarians agreed to begin again.

They planted gardens. An untended grove of olive trees was hacked back, pruned, and began to give out fresh new silver shoots. The scriptorium, intended to be temporary, was roofed over, then extended. Plans were laid for a tall building to contain all the volumes that other scribes were still bringing in from the debris of Alexandria, from the satellite libraries at Heliopolis and Constantinople. White marble stone was brought in on trading vessels and winched up the steep sloping incline above the harbour. A proportion of the older men began to talk of ‘our library’ as if it were home.

The ship’s captain who had navigated the ragged fleet of boats across from Alexandria went out on trading missions to Tyre and Tarsus and Lebanon. The traders brought news of the death of ‘Amr ibn Al-as. Alexandria was being rebuilt, they said, in the shape of a Muslim city. Christian missionaries had begun to convert the pagans at the barbarous Western edge of the world, at a place called Medicata Insula, a peninsula off the coast of the Celtic lands. Ships came back with their hulls full of cargo and their lockers full of writings, wafting the smells of oregano from Crete and orange blossom from Morocco and pine-wood from the forests of Juteland and Scandinavia. The elderly librarians spoke of building a marble colonnade to walk in during the heat of the day, as they had at the Alexandrian library.

In the last days of winter the second-eldest librarian died of a lung fever. They buried him in a plot dug out beside the new white marble chapel where the wet dark tree branches tangled in the rain. One of the passing traders murmured darkly about the lack of a priest. Fragments of parchment that had been torn blew in the wind and caught in unexpected crevices in the rocky paths. The sound of pages fluttering in a draft echoed under the noise of the wind blowing through the pines on the headland. The younger scribes began to pester traders to take them on their voyages, to tell them of the new cities to the north and the west, where men had better things to do than scratch dry words or breathe in the dust of books. Another year, and still no priest could be enticed to come. Another year, and the olive trees still did not produce ripe fruit.

Oregano wove through the salt-toughened bluegrass and showed purple stems over the thrift on the cliffs at the headland. As the librarians stood to look out to the horizon for ships, they noticed that the sun-baked herbs smelled bitter as ink. The ships returned each year with thinner, older thinner sails and sparser crews. Imperceptibly, the carefully tended vines were threaded with vetch and hops and rosebay willowherb. The ships in the harbour came and went, went and ceased to return at all.

In the space of a year and a half the island was emptied ship by ship, carrying cargoes of lonely grim men who had had enough of books. The ships rowed out past the breakwater one by one, in the cold half-light before the dawn, when the mist comes off the water. The slap of oars and the keels creaking, between one June and another September. Two generations later, and no one remembered the remnants of the old library. No one came back to see what had been left behind.

After the men left, the books whispered amongst themselves and spread their whispers over the island. The gardens took on the appearance of the texts that were read in them. The marble benches seemed to bear the imprints of the men who had once sat there, turning pages and slowly unscrolling rolls. The slow breezes that stirred the trees, the rustle of birds and the scuffles of dry leaves seemed to contain voices, as if the garden were quoting to itself from memory all that it had heard.

In the world outside, fragments of Aristotle’s unfinished works were copied and amended and re-copied. Writers reconstructed the lost plays of Sophocles. Teams of archaeologists pieced together poems by Sappho from tiny scraps of papyrus, and published editions marked with careful scholarly elipses. These texts pulled further and further away from the versions that lay in the library, and the library listened to the voices of its own texts. Over time books warped the space in which they were stored, pulling it inwards. Their physical weight caused shelves to bow and foundations to sag. The books seemed to whisper with vague inaudible voices, as the shelves creaked and floors of the library swayed on their foundations.

Here, Aristotle’s Poetics was never destroyed by fire and poison and madness in a chill northern monastery. Here, Sophocles told of Helen’s demand; here the tablets inscribed with the story of Troy’s ruin were kept, unbroken, since Priam’s order commanded them to be made. Here Sappho was never buried in Egypt, wrapped dryly around a mummy and falling into dust as she mourned for Atthis. Around her, the musky scent of amber and pine and rotting spinal tissue. Here are the unknown books, the tablets of Enkidu’s Song for Gilgamesh and the scrolls of the Book of the Battles of Yahweh; here are the books we have never read or written, waiting to be heard.

The papers whispered and muttered to themselves, as heavy manuscripts sat patiently on their shelves, waiting ready for the day when a new ship should blow off-course and discover the ruins of the library of Alexandria, quietly reading to itself.