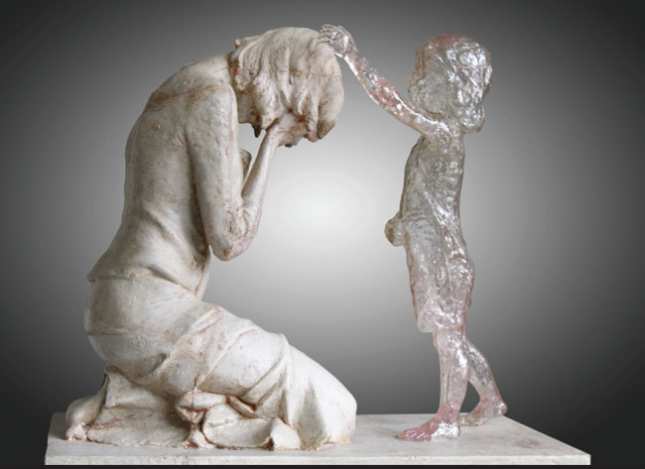 You may well have seen this image – it’s not newly out there – but the other day a friend of mine mentioned it again, and I wanted to take a minute to pin down what’s so disturbing about it. Obviously, it’s easy to get angry at the basic message, the idea that a male sculptor has decided to guilt-trip women in this particular way. It’s also easy to take shots at the twee aspect – the toddler touching the crying woman on the head is cheaply emotive, designed to provoke a cascade of sympathetic reactions before we read what the subject matter is. But I wanted to go deeper than that, to explain why I find this so particularly disturbing in its connotations.

There’s a visual vocabulary here that’s subtle and manipulative.  If you know Christian art, you know that the child’s gesture isn’t merely affectionate – it is a ritualised gesture, a gesture of blessing or forgiveness. The woman kneeling before a child who raises his hand over her head is a Christian trope: it’s evoking the sinner Mary Magdalene kneeling at Christ’s feet, or the baby Jesus with his mother Mary. Implicitly, the statue invites us to parallel the child’s figure with the saintly, the holy.

Notice how the woman isn’t really sobbing in a realistic way, but kneeling with her back straight and her head bent, and propped up on her knees with one foot supporting the pose? That’s not a casual posture, but a ritualised use of the body. In Christian culture, from the early centuries, men wrote manuals describing the proper postures of prayer, the way the body could be disposed to function more effectively as a channel for prayer and penitence. I’ve read medieval books with drawings of how one should kneel or prostrate oneself, and they still exist today. Such images came to have a reciprocal relationship with aesthetics of prayer and penitence, so that the famous images you will have seen of people kneeling in prayer are shaped by this body of work. In this image, the woman’s body is deliberately unrelaxed – imagine taking on that posture and you’ll see how much bodily concentration it requires. It would quite quickly become painful. Her emotion is not spontaneous, but physically disciplined.

There’s something duplicitous about this, then: the sculpture purports to reflect an outpouring of emotion – and there’s an idea of spontaneous, unconsidered action and long, considered regret in the anti-abortion narrative – but it does no such thing. In the context of abortion, it is telling that this is, visually, a woman doing with her body exactly what the Church tells her, positioning her body in the posture of grief dictated by this tradition.

Women have been saying for a very long time that we should be able to talk more about abortion, and I’ve heard claims that this sculpture facilitates that, that – even if you disagree with its anti-abortion message – it has value in that it might allow some women to own their emotions, to express feelings. But, because it is imposing not only the aesthetic and ideology of one man (the sculptor), but also of a long tradition behind him, its effect is erasing. Rather than expressing loss and regret, the statue subtly conveys the message that a female body should be scripted in a tradition of discipline and concentration, dedicated to holding its uncomfortable posture and telegraphing its inferiority.

There’s an obvious level at which any male attempt to represent what is a uniquely female experience is going to be an appropriation, and potentially an erasure of genuine female experience. When that goes hand-in-hand with propaganda designed to control women’s bodies, it is grotesque, and you might feel that knowing about this (largely historical) tradition of disciplining the body through prayer is far from the worst thing about this image: and that’s fair. But, I find it the more disturbing, because it is subtler: it displaces real women’s emotions and renders them unreadable to many viewers. Reading the sorts of sites that approve of this sculpture, I find both men and women approvingly labelling this posture and image as a representation of female ‘anguish’ or ‘heartbreaking’ pain – they cannot even recognise the difference between reality, and ritualised performance designed to control the kneeling female body.